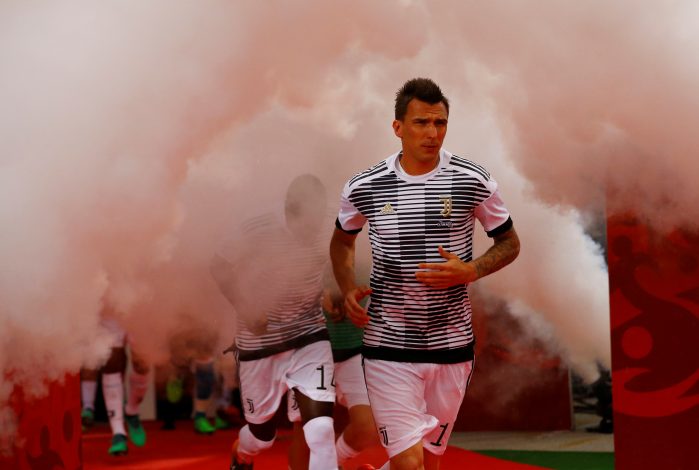 Recent reports have indicated that Manchester United are looking to sign Mario Mandzukic in the January window, with the Croatian striker potentially headed to Old Trafford as early as December.

Meanwhile, Zlatan Ibrahimovic, in a recent interview, jested that he was more than eager to rejoin Manchester United after his LA Galaxy contract ran out if the Red Devils needed him.

Here’s how signing the Croatian striker will be just as effective, if not more, than resigning the Swede, whose impact during his time at Old Trafford, was immense.

If acquired, Mandzukic will provide a stable and experienced alternative to Anthony Martial in the striker’s spot. This will ensure that the deadlock that the Frenchman’s injury caused earlier will not be repeated.

Further, Mandzukic could easily do what Ibrahimovic did when he arrived at Old Trafford, replacing the gap left by Wayne Rooney, who during his ending days as a United player was deputed to a deeper role.

Ibrahimovic’s time at United was a mixed one domestically, but in the Europa League, the Swede effectively led them to the final despite being unable to play due to injury.

Mandzukic’s heaps of European experience can now do the same for a significantly younger United team.

Further, he is also a big-game player who’s days at Bayern Munich. Atletico Madrid, and recently alongside Cristiano Ronaldo at Juventus has seen him develop a flair for delivering in high-octave matches against big opponents. United really need this level of performance at the moment, with points often being dropped from winning positions.

Moreover, his knack for scoring in Champions League finals and the World Cup semi-final (against England) can easily translate into success during English derbies as well.

3. Aids All Round Teamplay

Pogba loved assisting for Ibrahimovic and by the time he is fit again in the second-half of the season, the veteran striker will be an able presence to create for. This will also give the management at Old Trafford more reason to play Pogba at the no.10 so that there is an apt creative buildup, while also ensuring McTominay and Fred continue to excel in the midfield.

Further, the Croatian’s tendency to excel at the hold-up aspect can give time for the wingers and the attacking midfielders to compose themselves in the attack, ensuring a total-football ethos. With someone like Mandzukic up-front, Daniel James will no longer have his brilliant crosses wasted.

United have been lacking this at the moment, with Rashford either rushing the ball with poor runs or failing to be clinical when fed, at times missing an open target altogether.

United have lacked a solid aerial threat since Marouane Fellaini and Ibrahimovic left the club. Mourinho’s utilized Fellaini’s height in the Europa League final versus Ajax to title-winning brilliance.

If Mandzukic is acquired, Ole Gunnar Solskjaer can now have the luxury of experimenting with that and the club will also have one more reliable option for their set-piece takers to target instead of just Harry Maguire and Scott McTominay.

Moreover, given that Mandzukic will not play all the time, his physically dominant presence on the field and the ability can take on defenders aggressively will be a tactical difference to the likes of Martial, James, and Rashford who rely on their pace to confound the defense.

All in all, signing the Croatian will be like signing Ibrahimovic once more, without having to worry about his age and will provide the temporary transition this season until Martial can fully and regularly realize his brilliance as a no.9, or for the club to look at promising strikers like Haaland in the summer.