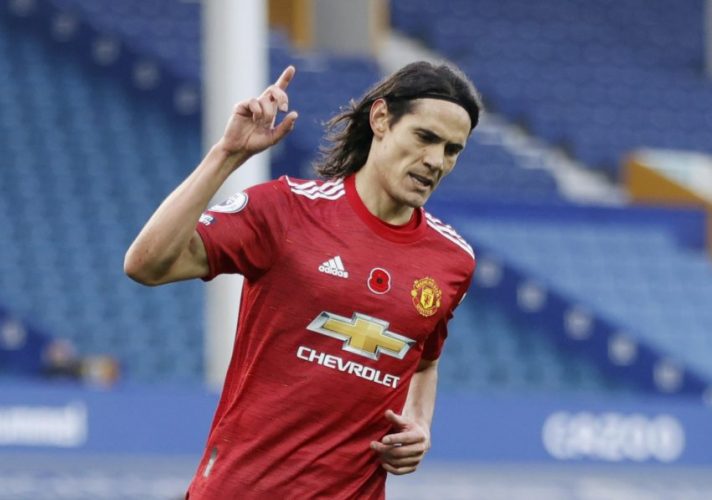 Despite the weak start to the season, being 14th on the Premier League table at the moment, Manchester United supporters have found reasonable grounds to let go of a sigh of relief after the club showcased a decent performance on Saturday securing a win against Everton.

With the scoreline registering 3-1 in favour of the away side at the final whistle, Bruno Fernandes and Edinson Cavani were the ones who stole the spotlight with all three goals coming off them. The match looked sealed when the clock hit the 90th-minute mark when the scoreline stood at 2-1 with both goals coming early through Fernandes.

Nevertheless, 5 minutes into the stoppage time, the Red Devils went on a counter-attack which in the end the Portuguese playmaker played in Cavani to his left, which the striker tucked past Pickford. The late goal received special attention, primarily owing to the fact that it’s the Uruguayan’s first goal for the Mancunians.

By bulging the back of the net, the 33-year-old became the oldest player to score his first Premier league goal since August 2016.

Furthermore, fans have been flooding social media with reactions claiming how well the striker went off the mark to tuck the ball into the net, further glorifying his positioning.

A few have proposed that the veteran forward should be given more game time by the club manager, as it also provides their primary attackers with a chance to relax as the team is about to go through heavy fixture congestion.

Edinson Cavani scored his 1st Premier League goal with his 3rd shot in the competition and his 1st big chance.

Elite positioning to stay onside and a wonderful finish. 👌 pic.twitter.com/HyTCqfbVVd

Cavani’s technique for the finish at the end was very intelligent.

Opened up his body to look as if he was going to shoot far post but then pulled it back into the near post, thats what a top striker will give you.

Cavani needs to start ahead of Martial.
Discuss?

Make Cavani your first choice center forward. Let Rashford and Martial battle it out on the left hand side.

With plenty of supporters stating his goal gave them more joy than the win itself, the ex-PSG man could proceed without worries being well aware that the supporters have got his back.

← Everton 1-3 Man Utd Player Ratings: Fernandes Stands Out From The RestBruno Fernandes’ Post-Match Interview Was Even Better Than His Performance →