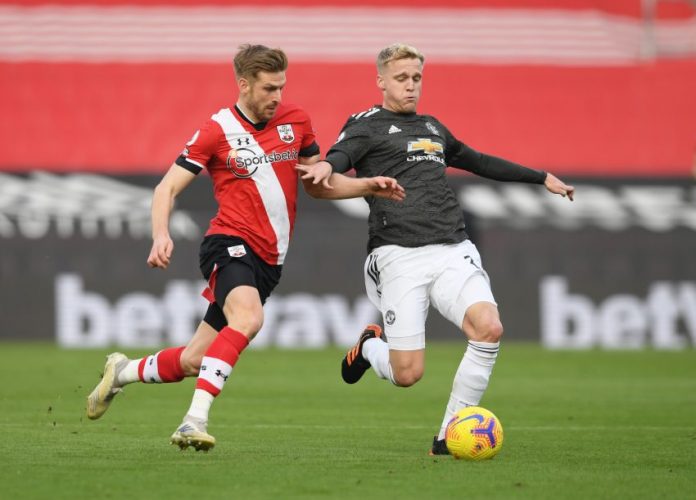 Manchester United completed a late comeback against Southampton to claim their fourth consecutive win in all competitions.

Bruno Fernandes and Edinson Cavani, the duo who joined the club in 2020, were involved in all three goals, with Bruno Fernandes scoring the first and creating the third with a quick free kick to Marcus Rashford, who then found the Uruguayan striker in the box with with a cross.

The former PSG man, before his winner in the stoppage time, also assisted the Portuguese for the opening goal and bagged another in the 74th minute.

However, another player who arrived at Old Trafford this year played a key role in Manchester United’s record eighth away win in the league.

Donny van de Beek was handed his first Premier League start after struggling to get minutes early on in the season. He wasn’t directly involved in any  of the three goals, but his link up play and incisive passing led to continuous pressure on the Southampton defence post interval.

He pushed the home side’s backline closer to their goal with 100% dribble success rate, while also making sure his teammates retain possession with 10 ball recoveries and 82% pass accuracy. His 4 tackles also secured the Red Devils against potential counter attacks from Ralph Hasenhuttl’s team.

The former Ajax man is more used to playing closer to the goal, but thanks to Bruno Fernandes’ form it will a be tough task for any number 10 in the world to take his place in the current Manchester United setup.

Nevertheless, van de Beek’s versatility means he can be a great option for Ole Gunner Solskjaer in multiple positions, as shown in the Champions League against Istanbul Basaksehir where he lined up alongside Fred in a double pivot, while against Southampton the 23-year-old excelled in a 4-4-2 diamond.

Edinson Cavani has more or less booked his starting spot for the Champions League reunion with Paris Saint-Germain, and if there aren’t any injury issues, Donny van de Beek has also done enough to secure the starting XI spot – no matter which formation the manager decides to go with on Wednesday.