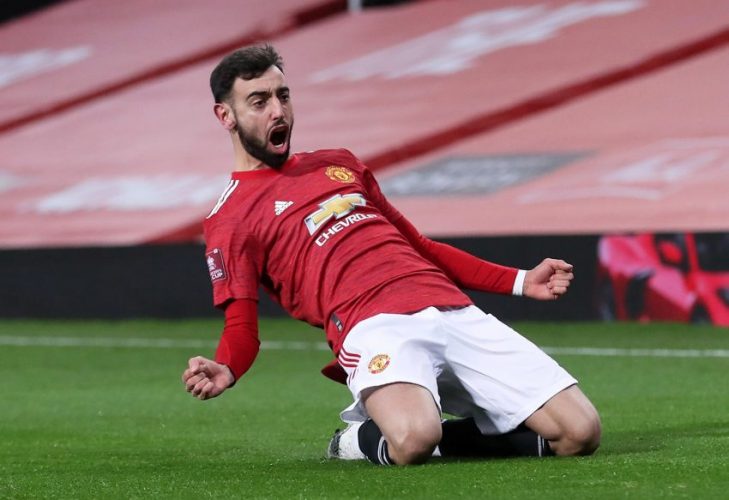 Manchester United steal the victory against Liverpool as they progress past the FA Cup 4th round.

The Reds travelled to Old Trafford tonight in hopes to redeem themselves for last week’s disappointing outing. Both sides fielded very strong teams and it looked as if Jurgen Klopp’s men could do one over United after Mohamed Salah opened the scoring early into the first half.

However, the tides turned after Mason Greenwood equalised just 8 minutes later, which was followed up by a brilliant goal from Marcus Rashford. Although the Egyptian managed to score a second, it was not enough as Bruno Fernandes yet again emerged as Ole Gunnar Solskjaer’s saviour.

The Portuguese stepped up to take a freekick during the final quarter of the match and took an impressive low altitude shot that made it past Alisson with ease. It was an effort of beauty that deserves every bit of praise it is receiving.

Fernandes has shaken off last week’s criticism quickly and responded loudly on the pitch with a brilliant set-piece, which has prompted some interesting reactions on Twitter.

The Portuguese international had been under fire recently for underperforming in big games. And having been presented with the opportunity to prove that narrative wrong, the midfielder took his chance with some aplomb. To shoot such a low ball from a freekick is not an easy task and doing it against his side’s fiercest rivals in a cup game only makes it sweeter.

With the former Sporting Lisbon man coming through once again, the Red Devils make it through to the next round while the Merseyside outfit’s bizarre dip in form continues to haunt them.

← What Robertson Did Before Mason Greenwood’s GoalManchester United 3-2 Liverpool: 4 Things We Learned →