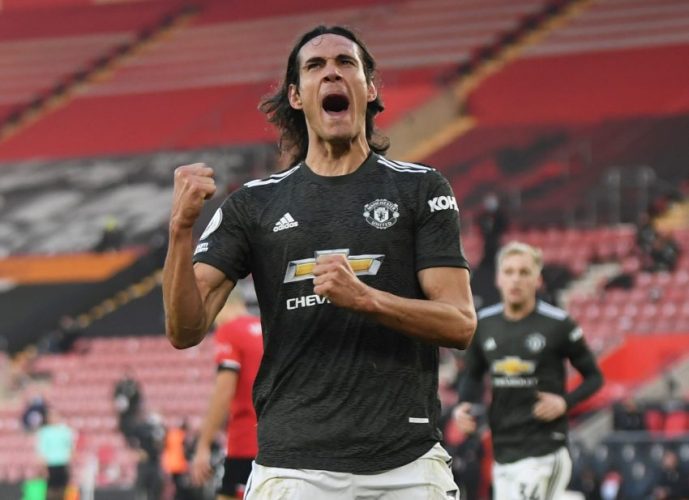 Manchester United were able to steal back all three points at home to Brighton and Hove Albion.

The Red Devils fended off quite well for themselves after Danny Welbeck opened the scoring against them on Sunday.

Marcus Rashford was aided by a Bruno Fernandes pass to equalize for the home side.

Further, it came till quite near the full-time whistle for the game to be settled as Mason Greenwood made the best out of a ball that Paul Pogba lobbed into the box, heading in a decisive winner.

The goal had a striking similarity to the one that Edinson Cavani headed into the back of the net back in November against Southampton.

The particular goal was also one where United were able to steal back three points from a losing spot, a feat they have gotten quite comfortable at already this campaign.

Greenwood’s attempt was also able to seal the win for the Red Devils, who have now been unbeaten in 10 consecutive Premier League games.

The similarity between the goals was certainly a talking point amongst the fans and Ole Gunnar Solskjær likewise saw the semblance, stating: “He’s [Greenwood] learnt from Edi [Cavani], and of course it’s important that when Edinson is here now, he’s not going to play football forever, but he’s probably picked up the trades of that movement.”

Greenwood has had a comparatively muted goal contribution this season compared to the scoring frenzy of the last campaign. Regardless, now with Anthony Martial’s potentially worrying season-ending injury, the teenager can certainly attempt to notch a few more to his name by the time the season comes to a close.

With this win, United have cemented their spot in the top-four, although every elusive of any bid to thwart their neighbour’s title run.