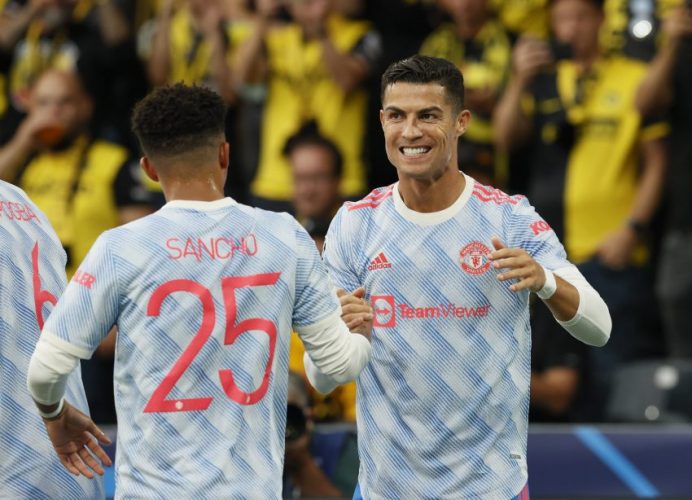 Despite Manchester United disappointing during the Champions League opening week, Cristiano Ronaldo had an eventful match.

The veteran was one of the few positives from that night – enabling his side to take the lead early on in the first half. Ronaldo’s instinct and intelligence as a seasoned striker allowed him to capitalise on a world-class early ball from Bruno Fernandes – a classic CR7 goal.

On the other hand, viewers all around the world and fans at the stadium must have seen the Portuguese international giving his shirt away to one of the stewards at the end of the game. The reason behind it is very heartwarming.

Prior to the kick-off, the Portuguese accidentally hit one of the staff at the stadium during the warm-up training. The woman sustained an injury and needed medical attention.

Fortunately, the steward seemed to make a recovery by the end of the fixture which is when the former Real Madrid man sought after her and handed her a memorable souvenir as a gesture of apology.

The Portugal skipper did not let his error slip from his mind because of the defeat – a true picture of his humility.

Following the game, the forward took to social media to issue a message to the team urging them to prepare for the next game after recovery.

Wasn’t the result we wanted, but now it’s time to recover well and focus on the next game!👏🏽👊🏽 #mufc pic.twitter.com/J97WdtIylR

The 36-year-old’s experience and winner’s mentality are on full display here. Ole Gunnar Solskjaer will hope this attitude spreads throughout his young squad.

The ex-Juventus man not only stays humble and treats everyone with kindness, he also has the hunger and desire to push forward despite setbacks. United will be happy to have a player of the most exemplary professionalism and leadership back at the club.