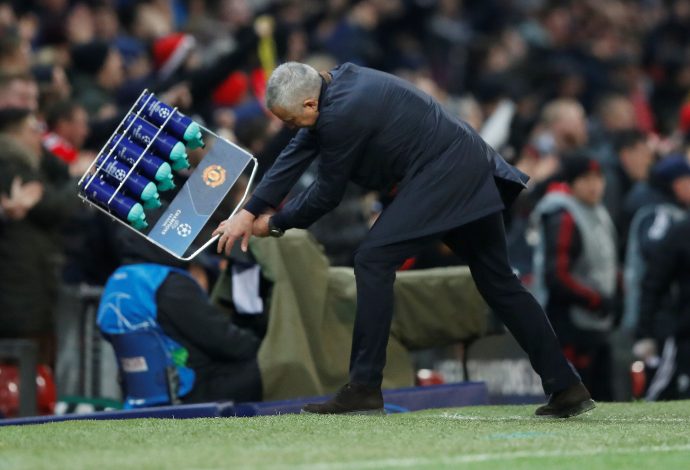 Fans at the London Stadium saw a glimpse of Jose Mourinho in Ole Gunnar Solskjaer during Manchester United’s visit on Sunday.

The Red Devils secured a hard-fought win against the Londoners during their latest outing. Although Said Benrahma opened the scoring, it was quickly cancelled out by Cristiano Ronaldo’s equaliser, after which Jesse Lingard managed to net the winner towards the climax of the match.

However, the Hammers almost destroyed the Englishman’s chance at redemption – following last week’s debacle in the Champions League – by winning a penalty during the dying minutes of the game. VAR deemed that Luke Shaw had committed a handball leaving the United boss absolutely furious.

The decision prompted Solskjaer to slam the nearest object he could find – which happened to be a water bottle – and slam it on the ground violently. The Norwegian’s flare-up was very reminiscent of Mourinho’s touchline rage moments during his time as the United manager.

Although it was in a celebratory way, the former Real Madrid boss was seen committing a very similar act back when Marouane Fellaini rescued the Mancunians by scoring a last-minute winner against Young Boys in the Champions League. From 2018 to 2021, the passion at the helm of Old Trafford remains the same.

The resemblance did not go unnoticed as fans on social media were quick to draw comparisons between the two coaches, as many would have done at the stadium.

Meanwhile, this goes on to show the former Cardiff City boss’ passion and desire. The 48-year-old is often portrayed as an easy-going gaffer, but clearly he can be aggressive when he needs to be. It is no surprise that a star-studded squad such as his still looks up to him and trusts him completely.