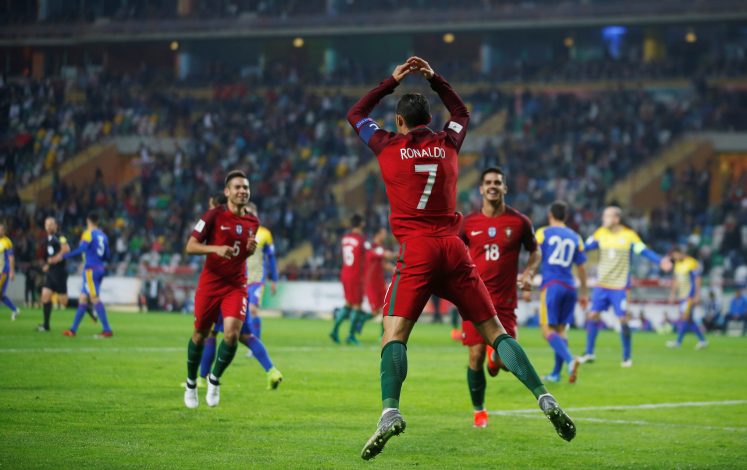 Cristiano Ronaldo remains in a league of his own on the international stage, as he stretched his goal tally to 115 with a hat-trick.

Portugal smashed five unanswered goals past Luxembourg in their World Cup qualifier, as each goal of the night saw a direct involvement from a Manchester United player.

Ronaldo scored two goals from the spot to end the away side’s hopes of causing an upset very early in the game. The Portuguese talisman’s last goal, to complete the 10th international hat-trick of his career, came very late in the game from a close range header to the bottom right corner.

Meanwhile, Bruno Fernandes scored in the 17th minute, and assisted Joao Palhinha’s goal after the break. The Sporting Lisbon midfielder celebrated his mark on the game by hitting the Ronaldo celebration, much to his captain’s delight. Fans were equally ecstatic after another Ronaldo-show.

Ronaldo has now scored more goals than Messi in 2021.

Just a reminder that only 16 out of Cristiano Ronaldo’s 115 international goals have been penalties (13.9%). That’s all.

At this rate Cristiano Ronaldo might actually surpass the woman’s record for most goals scored with their national teams.

The 36-year-old has had a prolific start to a new season for both club and country, pushing Fernando Santos’ men to just a point behind Group A leaders Serbia with a game in hand.

United boss Ole Gunnar Solskjaer will hope the scoring run continues, with a tough run of fixtures coming up.

Further, Ronaldo’s two goals from 12 yards are bound to increase pressure on the Norwegian to reconsider his decision with regards to penalty duty.