Modern football has a good list of pros attached to it, but it also carries a long list of cons that need to be addressed and spoken about before they start to spoil the beautiful game as we know it. Criticism is always welcome and with the sport having such a global reach, there is bound to be quite a bit of it on a daily basis.

However, it is not at that point where the problem begins, it is with the lack of in-depth appreciation that a lot of professionals face that brings out negativity that should not be promoted. Football experts and pundits of today have a fixed set of adjectives they use to describe different categories of players, something that should change from good performances to bad, from match to match, and goal to goal.

An easy way to highlight this topic is to take a closer look into the regular analysis received by Romelu Lukaku ever since he became a top transfer rumour at the start of the summer. Our objective is simple, to treat you with the truth and it is exactly what great talents like Lukaku deserve.

The big centre forward is a goal-scorer and there are no two ways about it, but that is not the only thing that makes you a Manchester United attacker under Jose Mourinho. Not only does the player find the back of the net on an impressive rate, but is also a blessing for the team-mates around him with the excellent link up abilities he possesses.

Before we dip further into the assessment of Romelu Lukaku’s not so popular traits and statistics, lets clear the obvious ones out of the way to begin with. In terms of goals scored, the numbers are phenomenal to say the least. 17 goals for West Brom in 2012-13, 15 for Everton in his initial loan spell, and eventually becoming their highest ever record scorer last season is enough proof to show that his eye for goal is certainly a good one.

The 24-year-old is currently the most expensive Premier League purchase, and with that tag comes a license for one and all to keenly observe each step he takes and review it with their shower of expertise. Be it appreciation or the opposite side of it, there is only one way it all goes – Linear.

For example, when speaking about the Belgian and comparing him to Alvaro Morata, Paul Merson said: “Not bright enough to play with Eden Hazard and Cesc Fabregas.”

Let us begin with the basics. In a 110 total appearances for Everton over the past three Premier league seasons, Romelu Lukaku has had 149 successful dribbles to his name, a stat that clearly shows the player is more than tap-ins and bullet headers. While Harry Kane is someone considered to be good on the ball and silky smooth while running through defences, even his 136 successful dribbles do not match up to the number put up by his Golden Boot competitor in this particular category.

Alan Pardew had a similar input while talking about the new number 9 at Old Trafford, and according to the former Crystal Palace boss, he lacked the ‘cleverness’ that Ibrahimovic and Van Nistelrooy had that helped them become the greats they did.

Despite being accused of not being a clever lad, Lukaku surely does pass the ball around like one. In the past three seasons at Merseyside, the forward managed to provide 135 key passes for his team-mates, which are staggering compared to the 113 provided by the League title winner Diego Costa.

As man who has yet to secure a stable job in management, taking a note of these might help Pardew improve his levels of judgement to say the least. One could consider this view of Lukaku to be the opinion of a selected few, but that is far from being the case. The majority of the panel does seem to agree with the likes of Pardew and Merson.

Another fine example of unnecessary criticism came from Mina Rzouki when she claimed: “I would pay £20m or £30m more if I had to and I would bring in Morata. That is because I would always prefer an intelligent player in my team. Even if he doesn’t score as many goals, even if he doesn’t do whatever he needs to.”

Let us remind ourselves that while Lukaku left Everton being their number one man and their Player of the Season, Morata, on the other hand, bid goodbye to Real Madrid after getting frustrated of being left on the bench more often than not.

If that was not enough to silence the likes of Rzouki, Lukaku’s got a few numbers to back it up. Not only does the Ex-Evertonian have a better goal tally than Morata from last season, his 6 assists compared to the Spaniard’s 4 in the La Liga should be a loud and clear shout into the ears of those unable to look beyond power and their so called intelligence. The case for Lukaku having a footballing brain of the highest order gets stronger when his 1.3 key passes created per game during last season is actually higher than Robert Lewandowski’s 0.9 for Bayern Munich.
One of them probably deserves to be called a lethal unstoppable force, and the other is a Polish international.

Add to that the unique stat of Lukaku averaging a greater passing length of 13.73m compared to Morata’s 13.62m and the matter of higher intelligence can be brought to an easy conclusion. Kylian Mbappe is a name that has taken the world by storm and has been hailed for his pace, skills, and all round abilities. Given the teen’s young and fresh mindset towards the game and his quick thinking, his number of 11 odd passes per game does not even compare to the impressive 26.1 Lukaku managed last season.

While we’re on it, let’s bring an end to further unwanted discussions related to the player’s different aspects of the game by taking a closer look at the details many miss out on. Out of 189 games played in the League so far, Lukaku has managed almost 4,500 passes to his name. Furthermore, despite being a star striker, only 6 of his goals have come from the penalty spot.

Taking mental pictures, running through countless DVDs, studying numerous defenders, attackers, and also fellow team-mates, are all signs of someone whose only aim is to be better without being even slightly bothered about the unfair depreciation he receives.

It is alarming how one finds normalcy in such critical statements, those when broken down can be called downright disturbing and stupid. If paid attention to, the sense in these remarks is extremely hard to be passed by as justified. A player who at his age has more goals than Ibrahimovic, Ronaldo, and Suarez did, and whilst playing for sides like West Brom and Everton, does speak a lot about how intelligent he is where it matters the most, in front of the goal. A player who almost won the Golden Boot last season, and is his country’s number one striker, has to certainly be more than someone who is deemed to be nothing but strong and physical.

The Belgian’s understanding of the game and his presence across the pitch can also be brilliantly assessed through his defensive contributions. Not only has the player managed 49 clearing headers in his career so far, but has been extremely influential in managing 8 interceptions and showing good discipline with zero red cards to his name.

Before we reach the clear conclusion that that player is a genius on the pitch, it is important to understand how good he is off it too. Be it extremely dedicated training sessions, punctuality, or non-stop hard work, the player does not stop. Also, impressing the likes of Carragher with his display of attacking movements and leaving Henry awe struck with the way he spoke about his learning techniques, are no small feats either.

The striker has already gotten himself up and running, and bagged in 3 goals in 3 matches for the Red Devils so far, giving us a clear sign of what is expected to come during the remainder of the season. 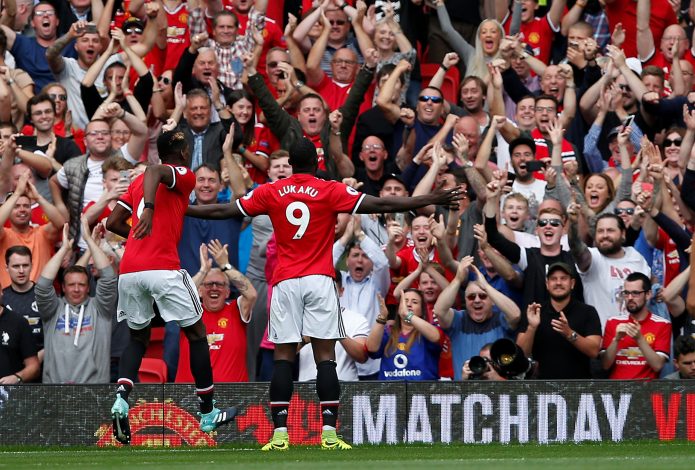 When it comes to the likes of extremely talented footballers such as Pogba, Lukaku, Yaya Toure, Didier Drogba and more along those lines, there is clearly more than strength on offer. Their techniques, their vision while on the ball, their positional sense and their delicate ways of keeping the game in its proper flow are things the experts should turn their heads towards, and help the world know exactly what makes them the great players they are.

A player is playing in one of the best club’s in the world and is doing an excellent job at that, and there is no bigger irony than some people sitting behind a desk calling him ‘unintelligent’.