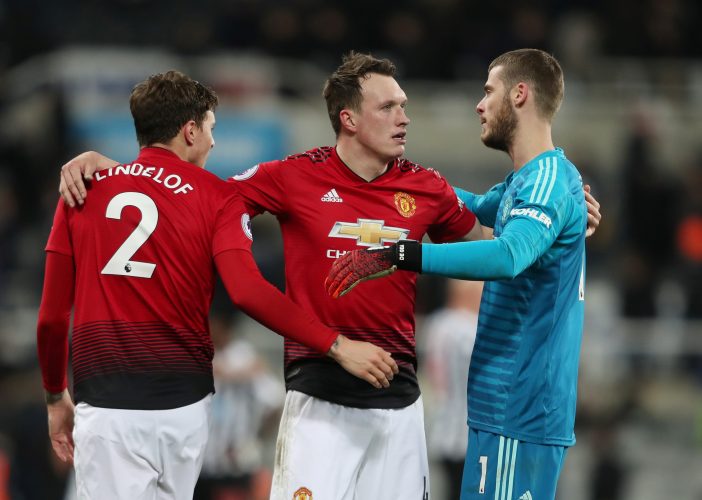 Romelu Lukaku made yet another instant impact from the bench to score the opener, before Marcus Rashford doubled the lead for the visitors.

Here are the player ratings from the Premier League encounter:

ANTONIO VALENCIA: 5
Barely attacked from the right wing, but did his defensive job. Far from the attacking full-back Solskjaer demands.

VICTOR LINDELOF: 8
United’s new rock at the back. Was dominant in the air and composed in possession.

PHIL JONES: 6
Had several nervy moments early in the game, but settled in as the match progressed.

LUKE SHAW: 6
Defended well, but couldn’t attack as much as he has been in recent games.

ANDER HERRERA: 6
Wasn’t as involved in the attack as Ole would have liked.

PAUL POGBA: 6
Was kept quiet by Newcastle’s strong midfield pivot. Had a great chance to make it three late in the game, but ended up hitting the side netting.

JUAN MATA: 5
Failed to offer any attacking threat from the right wing. Subbed.

ANTHONY MARTIAL: 5
Dangerous at the start of the game, but fizzled out as time passed. Subbed.

MARCUS RASHFORD: 8
His strong free-kick led to the opener, as the rebound was slotted in expertly by Lukaku. Scored the second with a calm finish that will make his manager proud. Man of the match.

ROMELU LUKAKU: 8
Bagged a goal within seconds after coming on, and played a major role in the second. Solskjaer’s very own super-sub.

ALEXIS SANCHEZ: 7
Set Rashford up with a smart pass.

JESSE LINGARD: 6
Offered an attacking outlet after coming on late in the game.

← Tactical Analysis: How Solskjaer Has Made Pogba A Force To Be Reckoned WithNewcastle United 0-2 Manchester United: 5 Things We Learned →