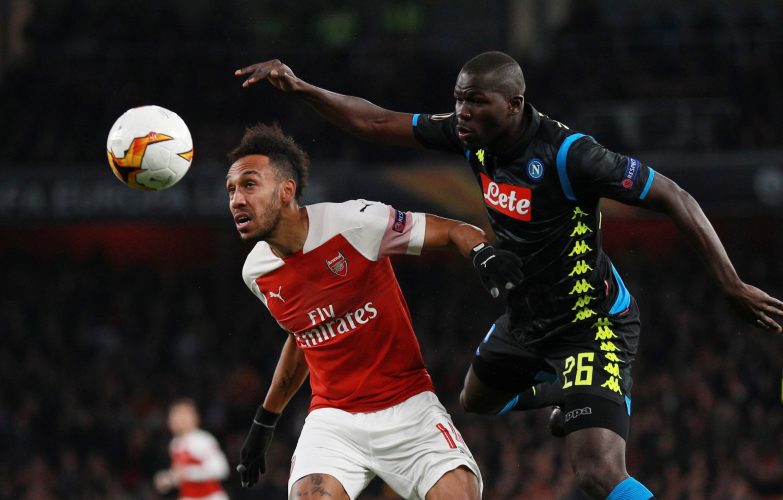 Pierre-Emerick Aubameyang may be set to depart the Emirates in the summer with Manchester United, Barcelona and Paris Saint-Germain remain interested, reports the Sun.

The Gabonese international has been an instant hit in the Premier League since his arrival from German outfit Borussia Dortmund. In his first full season, Aubameyang managed to prize the Golden Boot with 22 goals to his name.

So far this season, the lethal striker has already hit 17 league goals and has registered 3 goals in the Europa League. Interestingly, only Mohamed Salah has managed to outscore the Gabonese in the league since his debut.

Clearly, the ex-Dortmund star is a valuable asset to any club he’s at and that remains the same for Arsenal as well. The forward is clearly the best goal-threat they’ve has since Robin van Persie and Alexis Sanchez and keeping hold of him should be their biggest priority.

However, the former Saint Etienne man is hoping to play Champions League football more often as he approaches the twilight of his prime. This clearly is no longer a luxury at North London as the Gunners have failed to qualify for the competition for the last three years and could still make it four years by the end of this season (if there is an end to this season, that is).

The situation has made negotiations a process that is struggling to progress. Moreover, higher-ups such as Raul Sanllehi and Edu are reluctant to repeat their mistake of letting the clubs best players on a free.

Moreover, it was also reported that Barcelona, United and PSG are following the situation closely as the trio continue their search for an out-and-out striker. Although it is unclear whether any of them are serious about their interest.