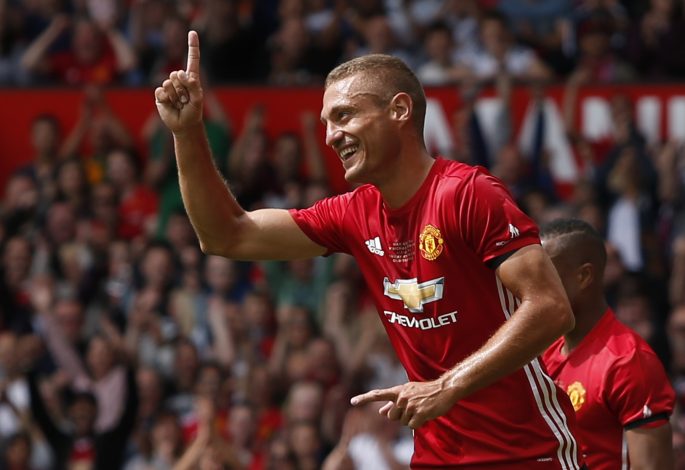 Praise continues to hail down on Harry Maguire thanks to his recent form; the latest from the mouth of Nemanja Vidic.

The Serbian had one of the most illustrious careers a defender could have under the reign of Sir Alex Ferguson. Vidic was instrumental to Manchester United’s success and cemented himself as one of the all-time greats of English football.

Naturally, being lauded by a legend is definitely a clear indication that Maguire is headed in the right direction.

“He is 8/10 at everything – not as good on the ball or as fast as Rio, doesn’t tackle or head like I did, but has quality across his game,” the former Serbian international wrote for the Athletic.

“He’s fast enough, strong enough, can jump and play the ball, his positioning is fine.”

The former Leicester City man had always been under extra scrutiny from pundits and fans alike due to his record-breaking transfer fee. It has been an uphill climb for the Englishman in terms of proving the negative narratives about him wrong.

However, over the course of the 2020/21 campaign and Euro 2020, the defender has seriously flipped the discourse around him. Not only has the England international been able to convince people of his quality, he has also established himself as an essential figure for club and country.

The former Red Devil endured through the peak of Premier League football whilst being the skipper for half of his time at United, so his judgement is of the highest standard. Having the approval of such a big name in football is nothing short of an accomplishment, especially for someone who had always been harshly criticised.

The centre-back now has a golden opportunity to cement his name amongst the top percentile of the world’s defenders – two more wins at the Euros would be all it takes for that.