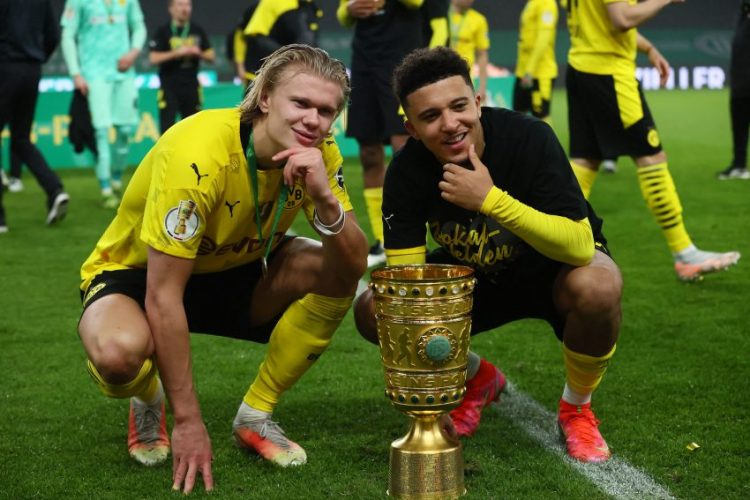 Jadon Sancho’s transfer to Manchester United has certainly got a lot of eyes. The Old Trafford outfit succeeded in securing his signature after a prolonged spell of speculation and murmurs around potential moves.

However, now that the deal is complete pending medical and official unveiling, Ole Gunnar Solskjær has all the freedom to plan his team around the promising attacker.

For one, the 21-year-old brings plenty of versatility to the set-up, such that Solskjær can actually go about deploying him in multiple ways.

On the other hand, he is likely to build on excellent creative talent already at the Theatre of Dreams. The likes of Bruno Fernandes and Paul Pogba are only apt to add to Sancho’s attacking potential.

However, this move also spells the end of one of the most promising attacking partnerships in the Bundesliga. Sancho alongside Erling Haaland was a force to be reckoned with and their attacking productivity last campaign spoke volumes of the same.

As such, it comes as no surprise that the Norwegian’s first public reaction to the transfer is a negative one.

This comes as no surprise as in addition to losing out on a good teammate, the prolific striker will also miss a fond friendship.

It will be interesting to see who will be able to fill that kind of a gap for Dortmund going forward.

For United fans, however, the reaction does inspire a little bit more greed as the potential for a Haaland transfer also looms large.

← Roberto Carlos On Luke Shaw: He’s Got Everything To Get To The TopManchester United Legend Nemanja Vidic Rates Harry Maguire →