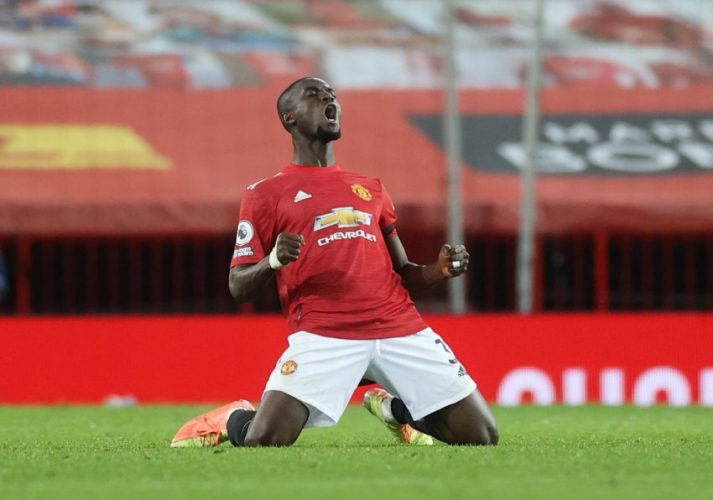 Manchester United drew 2-2 with Atalanta to remain on the top of their Champions League group.

Ole Gunnar Solskjaer’s men left it late once again to salvage a result against Gian Piero Gasperini’s side, who blew the lead twice in added time of each half.

Atalanta went ahead through a David de Gea blunder, and kept coming close to extending their lead against a disorganised defence. But amid chaotic display some United stars stepped up to dig the visitors out of a hole.

In what was only his second appearance of the season, Bailly looked more composed than the regular members of the backline, which lost all control and shape after Raphael Varane went off injured in the first-half.

Duvan Zapata got the better of him for Atalanta’s second goal of the game, but if it was not for the Ivorian centre-back the hosts would’ve put the game beyond United’s reach. The three-man setup that started the night was effectively resorted to a one-man defence.

No player created more chances than the Portuguese whilst he was on the pitch.

With Paul Pogba offering more possession to Atalanta than any creativity to his own side from the middle of the park, Fernandes was left with the task to open Atalanta’s defence, which he did masterfully with a smart back-heeled assist for Cristiano Ronaldo.

Yesterday, Ronaldo was named United’s Player of the Month for successive months, and his heroics on his return to Italy showed just why.

The 36-year-old came to the rescue once again in the Champions League, scoring a brace to win a crucial point for the Red Devils.

Solskjaer, whose United goal-tally of 126 Ronaldo surpassed with his stoppage-time equaliser, has made several mistakes this campaign. But bringing the Portuguese icon back to Old Trafford has proved to be a great decision so far.

← Antonio Conte To Tottenham: What It Means For Manchester United“He’ll Still Be Doing The Stupid Stuff” – Scholes Slams Pogba After Atalanta Draw →