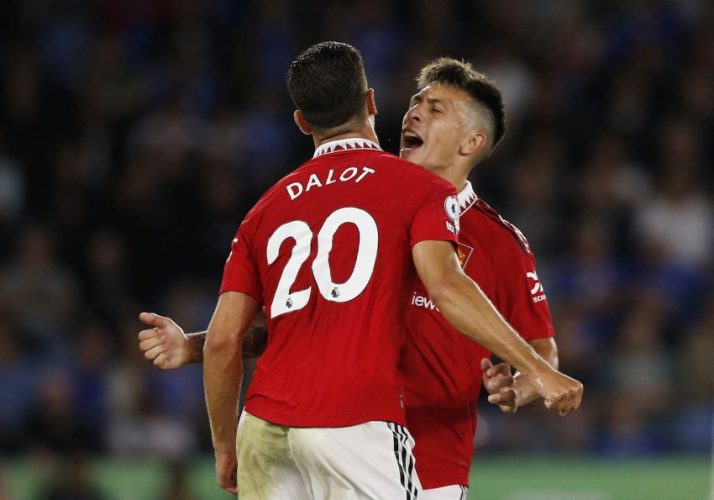 Manchester United are starting to find their feet under Erik ten Hag after two defeats in the first two Premier League outings of the season.

On Thursday, the Red Devils registered their third straight win after beating Leicester City 1-0 away from home. Jadon Sancho was the match-winner, but it was the visitor’s grit and intensity in their own defensive third that ensured all three points and a back to back clean sheets for a side whose defence at one point this year were as easy to cut through as butter.

The Dutchman made some bold changes in his backline after humblings against Brighton and Brentford, introducing Raphael Varane and Tyrell Malacia in place of captain Harry Maguire and Luke Shaw. Since that change, United have only conceded one goal in three games.

One of the stand out performers from the newly assembled backline has been Diogo Dalot. The Portuguese youngster had the right side on lock against Liverpool and Southampton with his aggressive defending and smart positioning.

The latest clash against Leicester was no different, as Dalot was yet again up for the challenge. He contested every duel with full commitment and celebrated the success no different than Sancho celebrated his opener.

Dalot enjoyed that one 💪 pic.twitter.com/ZVXq47HfXj

Fight for every ball 👊

Dalot has been f**king incredible. Wins the goal-kick and celebrates it like a goal with Lisandro Martinez — that's the Man Utd mentality we want to see.

Diogo Dalot celebrating a tackle and gets hugs and chest bumps from Varane, McTominay and Martínez. Love those sorts of things.

The duo’s energy has been infectious, helping United keep things in control during pressure situations around their penalty box.

Against Liverpool, Dalot’s tackle on Luis Diaz got the Old Trafford crowd going and helped Ten Hag’s men push Liverpool into their own half before Sancho’s goal.