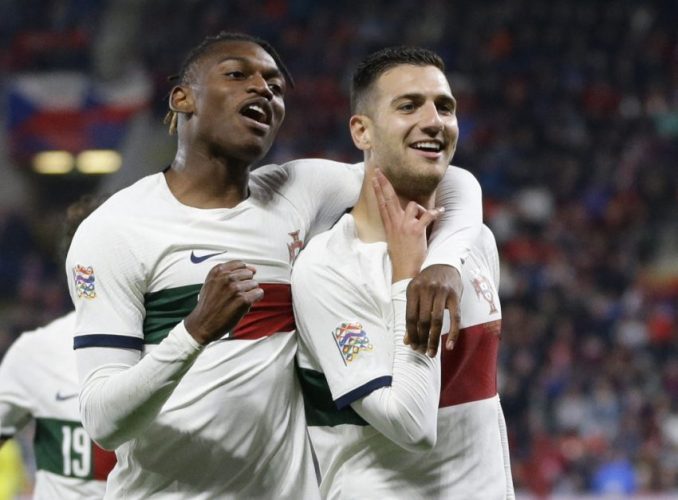 Manchester United players stole the show in Portugal’s 4-0 win over Czech Republic, as Diogo Dalot bagged the first brace of his senior career.

Cristiano Ronaldo, Bruno Fernandes and Dalot were all handed starts by Fernando Santos in the Nations League fixture in Prague on Saturday. The United trio delivered by either scoring or assisting all four goals on the night.

Dalot opened the scoring for the visitors in the 33rd minute after he was picked in the centre of the box by former AC Milan teammate Rafael Leao. Just before the break, Fernandes doubled Portugal’s lead from close range.

The United right-back’s second goal was even better, as he rattled the bottom left corner of the net from a left-footed shot from outside the box. Ronaldo, who conceded a penalty with a hand ball, joined the party late in the game by assisting Diogo Jota.

Nevertheless, it was Dalot’s overall display that would not only give encouragement to United manager Erik ten Hag, but also Santos ahead of the World Cup.

José Mourinho on Diogo Dalot in 2018 when we signed him:

“In his age group, he is the best full-back in Europe “He is an extremely talented young defender with all the qualities to quickly become a great player for this club.”

Dalot is better than Cancelo

Malacia scoring pearlers with the outside of his foot during Holland practice games. Dalot scoring 25-yarders for Portugal with his opposite foot. Only a matter of time before our in-form full-backs start producing these goods for Manchester United to punctuate their performances

The 23-year-old has had a brilliant start to the new season under Ten Hag, and it was impressive how seamlessly he carried his form to the international stage.

At the moment, Joao Cancelo is seen as a nailed-on starter at right-back for Portugal, but the Manchester City star might be forced to shift to the left flank if Dalot continues to impress both Ten Hag and Santos with his assured performance on both ends of the pitch.