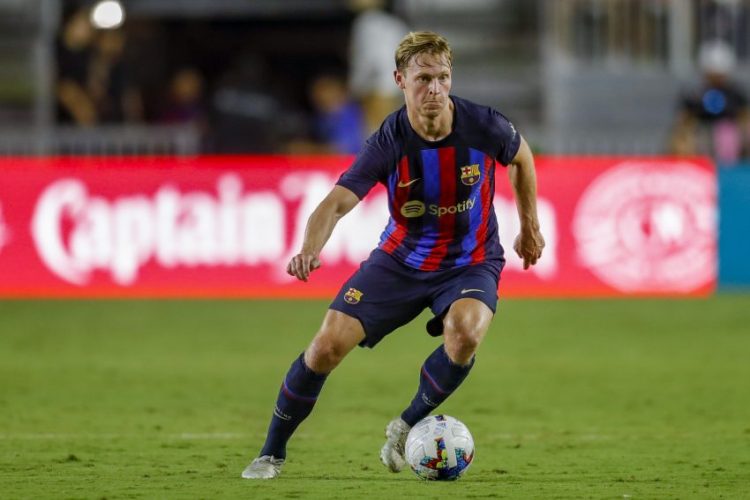 Two of the most iconic Champions League clubs are all set to meet in the Europa League, as Manchester United have been drawn against Barcelona in the play-off round.

United’s failure to top their Europa League group and Barcelona’s frustrating performance in the Champions League group stage have set up a tie that is bound to accompany a lot of interesting narratives.

Cristiano Ronaldo, if he stays at United beyond January, will return to Camp Nou alongside former Real Madrid teammate Casemiro. Frenkie de Jong, meanwhile, will be at Old Trafford after all, but in different colours.

Erik ten Hag, who was linked with Barcelona before Xavi’s appointment due to his philosophy at Ajax, will get an opportunity to show the Catalan fans Cruyffian football that they’ve rarely witnessed under the Spaniard.

Early reactions on social media already hint at the exceptional hype and headlines this clash will generate as we move closer to the kick-off at Camp Nou in February.

Frenkie de Jong in summer: You won’t see me playing Europa League football at Old Trafford this season. Nope. No thanks.

Barça vs Man United is a HUGE game.

Europa League or not, this is a battle between two of the biggest clubs in the world.

And I cannot wait for this!

The last time Cristiano Ronaldo went to the Camp Nou.pic.twitter.com/aZc6zbDfy1

Xavi on MUFC draw: It is the most difficult opponent once again. But we will look forward to it. They are a historic side, they have grown a lot with the arrival of Ten Hag, they have great players. It's the worst draw we could have got. Once again. No luck.

Comments from the Barca boss suggest he isn’t best pleased with the draw. The Catalan giants dropped down to Europe’s second-tier competition after facing a tough Champions League group that included Bayern and Inter.

Ten Hag, who’s yet to comment on the draw, won’t be delighted to face LaLiga leaders, especially when two extra games in the month of February could’ve been avoided with a more dominating performance against Real Sociedad.