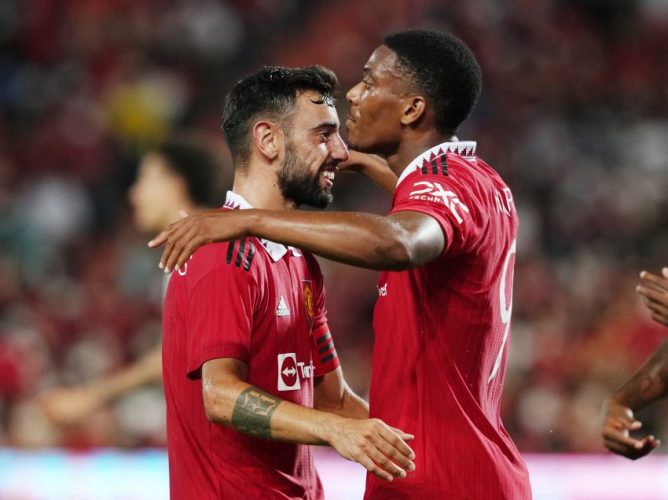 The Red Devils were on the front foot from the very first whistle, with Marcus Rashford and Anthony Martial both netting inside 23 minutes. Antony missed a great chance to add another goal early in the second half, but his fellow countryman Fred ensured the scoreline reflected United’s dominance with a cool finish minutes before the final whistle.

Here’s how United’s players rated in their last home game of 2022.

Wasn’t asked to do much, but used his chest smartly to stop a rare Forest attempt at goal.

Delivered another solid performance in the absence of Diogo Dalot.

Asked to start just nine days after the World Cup final heartbreak, the Frenchman delivered a flawless display at the back.

Partnered with Varane and looked as comfortable as the veteran centre-back in the heart of the defence.

Enjoyed the link-up with Bruno Fernandes and Rashford in the final third.

Effortlessly pulled the strings from deep all game and then showed his genius by stepping up and intercepting a Forest pass before finding Fred in the box with an exquisite ball.

Cheeky pass from the corner to pick Rashford for the opener.

Yet another lively performance from the United skipper. No player has created more chances from open play in the Premier League this season than the Portuguese.

Brilliant first-time finish to score United’s first goal followed by a selfless pass to set up the second. The Englishman is loving life under Erik ten Hag.

Good strike to double the lead.

← Ten Hag Pushing Manchester United To Agree Deal With England InternationalTen Hag Is Frustrated: What United Plan To Do After Missing Out On Gakpo →