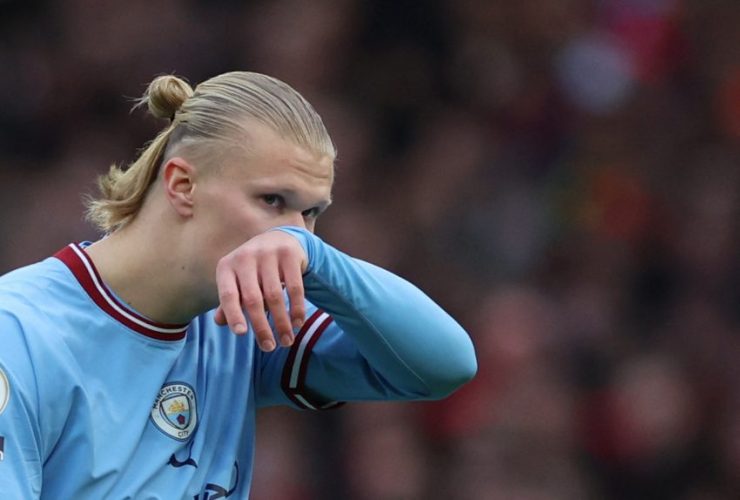 Erik ten Hag’s first derby outing was a learning experience, and the second turned out to be a testament to his elite game management.

Erling Haaland and Phil Foden had a field day at the Etihad 104 days ago. On Sunday, they came up against a side that – in the words of Bruno Fernandes – played as a team. They forced one to starve for touches and the other to sit back on the bench before the hour mark.

Luke Shaw, a left-back, was tasked with marking the Premier League’s most feared forward in the heart of the defence, and Fred replaced Christian Eriksen in the double pivot. The Dane, who usually dictates the play from deep, was instructed to press Rodri high up the pitch to disrupt City’s build-up.

Fred’s aggressive pressing and man-marking to stop Kevin De Bruyne from finding space to run into the channels were key in cutting off passes into Haaland’s path. Although the Belgian did get the better off United’s mid-block pressing once and managed to make the most of the rare opportunity by assisting Jack Grealish.

The approach of man-marking De Bruyne out of the game was never going to be enough on its own. And this is when Shaw’s physicality and mobility came into play.

The Englishman remained tight to Haaland all afternoon and won most of his defensive duels. The Norwegian, who enjoys staying close to the goal, had to drop deep to get any real touch of the ball.

Lack of space and time in possession meant De Bruyne and Rodri looked out wide. Ten Hag countered that by pushing his full-backs closer to City’s wingers. Rare cut-back attempts were thwarted by Raphael Varane and Fred who were quick to crowd the six-yard box.

← Man Utd 2-1 Man City: Five Things We Learned From Derby Win For The RedsWhat happened between Maguire and Guardiola at full-time after Manchester derby →