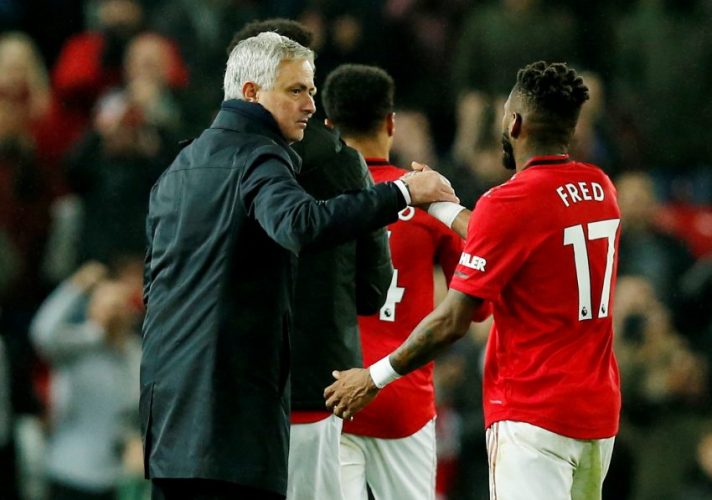 Since their incredible start to the season, the Londoners have been on a continual decline now having lost to Arsenal, Manchester City, Chelsea, Everton and Liverpool twice and Manchester United now. Essentially, Mourinho boasts one of the worst records in big matches this season.

Meanwhile, United have continued their good form and managed to produce a very good result tonight despite falling behind initially in the first half. Goals from Fred, Edinson Cavani and Mason Greenwood nullified Son Heung-min’s opener and ensured 3 points for their side.

Let’s take a look at 5 interesting points from the match:

Today’s win means the Red Devils go 9 points clear of 5th placed Chelsea. This lead can be considered a healthy sign of things to come as Ole Gunnar Solskjaer’s side sit at second place behind rivals City.

On the other hand, this means it’s an uphill climb for the North London club if they still hope to qualify for the Champions League next season.

The Old Trafford outfit have come a long way since their 1-6 home loss against Tottenham. Turning such a horrible result back in the return fixture is something impressive, especially in the manner in which the visitors did today.

Solskjaer’s men have progressed whereas Mourinho failed to maintain the highs of the season’s beginning and finds his side outside the top-six now.

3. The Stark Contrast Between The Sides

The Lilywhites have dropped 18 points from winning positions this season, which is a very significant number. Clearly, this does not reflect well on the manager as the inability to counter opposition tactics and creating a plan-B becomes apparent.

Meanwhile, United have won the most points from losing positions — a whopping 28 points. It is clear who the current comeback kings of the Premier League are.

4. Mourinho’s Failures Return To Haunt Him

Paul Pogba, Fred and Luke Shaw were consistently underperforming during Mourinho’s reign in Manchester. Pogba – at a point – was almost antagonised by the Portuguese gaffer.

However, these players have been rejuvenated by their Norwegian boss and returned to spell the loss for the former Chelsea boss. Not only does this show the ex-Cardiff City manager’s talents but can also be seen as poetic justice.

Dean Henderson has shined for his side yet again in a big game. The Englishman has had to wait quite a bit to display his talents for his boyhood club but the wait has certainly been worth it.

With another impressive performance, Henderson gave fans a sign of the times as the club approaches the stage of moving on from the ageing David De Gea.

Although a late title charge seems highly unlikely by the looks of things, the Mancunians can certainly add pressure on Guardiola. An unlikely scenario where the title challenge is up in the air in the late stages of the season will certainly be amusing to witness.
← Cavani ‘Closer Than Ever’ To Join Boca Juniors – Rojo Talks About Potential Move‘Picture for the Ages’ – Hilarious Interaction Between Mourinho, Solskjaer & Shaw At Full-time →