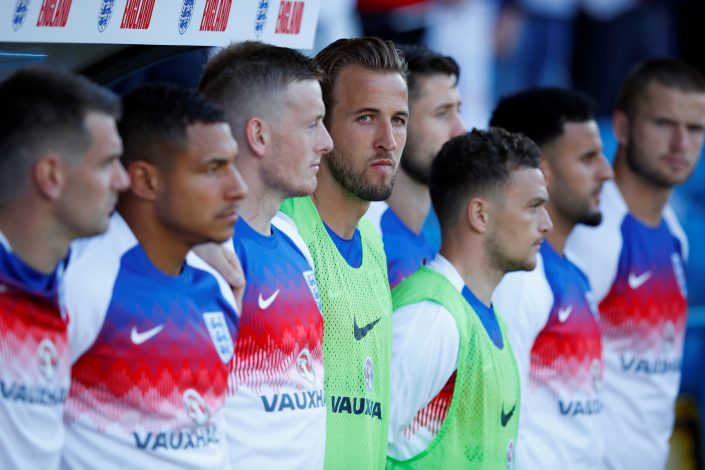 England and Scotland played out a goalless draw on a rainy night at Wembley.

The Three Lions attack looked sluggish, with centre-back John Stones coming closest to getting on the score-sheet. His header crashed against the post from a corner early in the first-half.

As for Scotland, their best effort came via Lyndon Dykes, who had a header cleared off the line by Reece James.

For the majority of the game, the Scots excellently kept their defensive shape, frustrating the likes of Harry Kane, Phil Foden, and Raheem Sterling.

Scott McTominay, who was used as the right-sided centre-back by Steve Clarke, excelled in a role he’s not very used to. Following his early slip, the 24-year-old grew into the game, and played a vital role in a cleansheet that earned Scotland their first point of the Euros.

Further, Declan Rice, seen as the ideal candidate by many United fans to accompany or challenge McTominay in midfield, also put in a disciplined display on Friday night. However, with the ball,  he lacked imagination against Scotland’s tight midfield.

Rice playing like when Phil Jones used to play in midfield

Scott McTominay have him all day long before Declan Rice ⚽️

McTominay heard the possibility of Rice replacing him and chose to end the guy’s career💀 pic.twitter.com/o4s6Svuicf

Despite Rice’s heroics in midfield for West Ham for the past two seasons, there seems to be a consensus of opinion amongst Premier League viewers that he isn’t very progressive in the middle of the park. Now, a disappointing England result would only amplify such notions.

United’s stance on the 22-year-old talent won’t change after just one game. But they must assess the difference in quality between Rice and McTominay before coughing up big money for the England international.