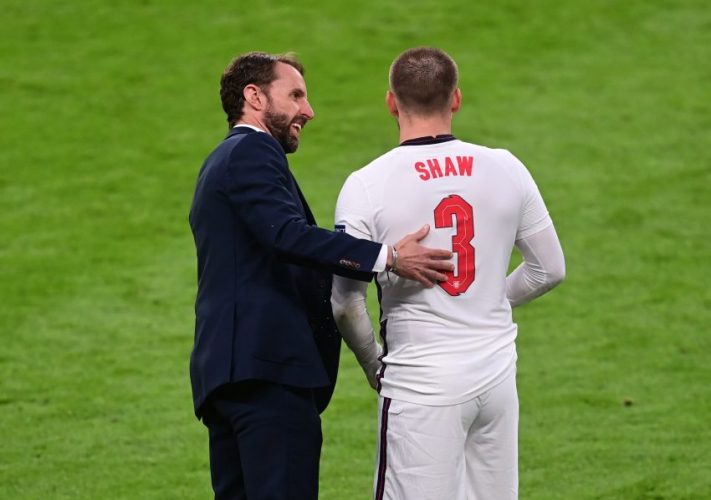 England have beaten old rivals Germany in the knockout stages of a major tournament for the first time since the 1966 World Cup final.

Raheem Sterling slotted home in the 75th minute of the game to open the scoring, while Harry Kane put the game to the bed, as he scored his first goal of Euro 2020.

With a 2-0 win over the Germans, the Three Lions booked their spot in the quarter-finals, where they will face either Ukraine or Sweden.

Luke Shaw’s role in England’s victory shouldn’t be overlooked either. Given license to attack by Gareth Southgate, he was involved in both goals at Wembley.

For Sterling’s opener he provided the inch-perfect pass, and was involved in the build-up of the second goal of the game, picking Grealish on the left, who assisted Harry Kane with a perfect delivery across the German goal.

Luke Shaw! What a revenge for him. Mourinho! With all due respect! His performance lately is “in your face”

Luke Shaw is the best left-back in the world right now. I don’t give a shit what Mourinho says. Man’s obsession is unhealthy.

Jose, are you watching? 👀 pic.twitter.com/OqJih5Hq5z

Luke Shaw was pretty much flawless. He kept a top class creator like Kimmich really quiet & also produced the assist for the 1st goal. And then the one time he decided to leave Kimmich, it was to dominate the 50/50 duel with Gnabry & set-up the 2nd goal. Phenomenal performance.

Luke Shaw has been so decisive from left wing back. The way he’s changed majority of people’s view on him over the last year has been incredible. What a fucking performance.

The 25-year-old will take a lot of confidence from his performance against Joachim Low’s side, cementing his place as England’s first choice left-back for the last 8 of the Euros.

Further, just after the full-time whistle, Fabrizio Romano confirmed that the Man United star will be offered a new contract. The Englishman is certainly shining both on and off the pitch.