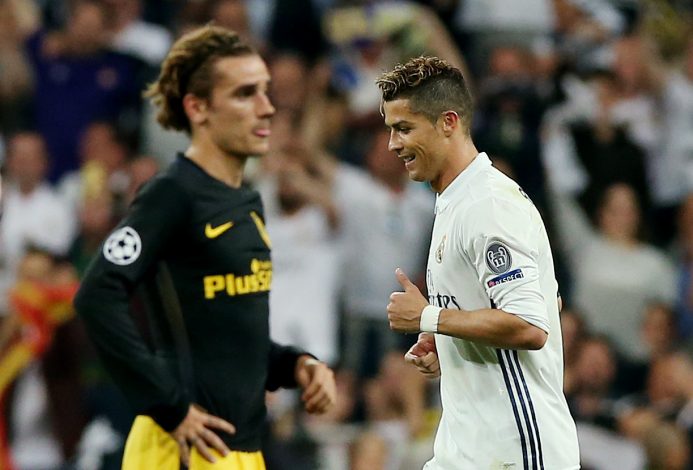 After some delay and controversy, the official UCL draw has been revealed. Manchester United will face defending Spanish champions Atletico Madrid in the Champions League round of 16.

The Spanish giants will have a familiar face waiting for them over the course of the two legs; someone they will not be too excited about meeting again – Cristiano Ronaldo. The Portuguese has time and time again left Atleti in dust and they will not be happy with the prospect of that potentially happening again. After all, with 34 goal contributions registered against them in 35 appearances, who can blame Diego Simeone’s side?

On that note, it is a perfect opportunity to look back at some of Ronaldo’s best moments against the La Liga outfit. Here are three times the Portuguese icon destroyed Atletico:

Ronaldo single-handedly put the tie to rest back in 2017 when Real Madrid faced their bitter rivals in the UCL semi-finals. The forward confidently netted three goals at home and won the first leg for his side.

A 2-1 win in the second leg proved to be too little for Atletico to overcome the herculean performance from the Euro champion.

2. Inspired A Brilliant Comeback In 2019 With A Hat-trick

When Simeone’s men won 2-0 at home in the first leg against Juventus back in 2019, most people ruled out any possibility of the Italians making it past the round of 16.

On came the former Real Madrid man who confidently said he will get his side through to the next round prior to the second leg and then proceeded to net a hat-trick to yet again leave the Argentine tactician in the dust.

Although everybody remembers the 2014 Champions League final as ‘that Sergio Ramos game’, Ronaldo’s contributions cannot be overlooked.

In extra time, the Portugal captain provided an assist and got himself on the score-sheet to win the European cup for Los Blancos in the most dramatic of fashions.