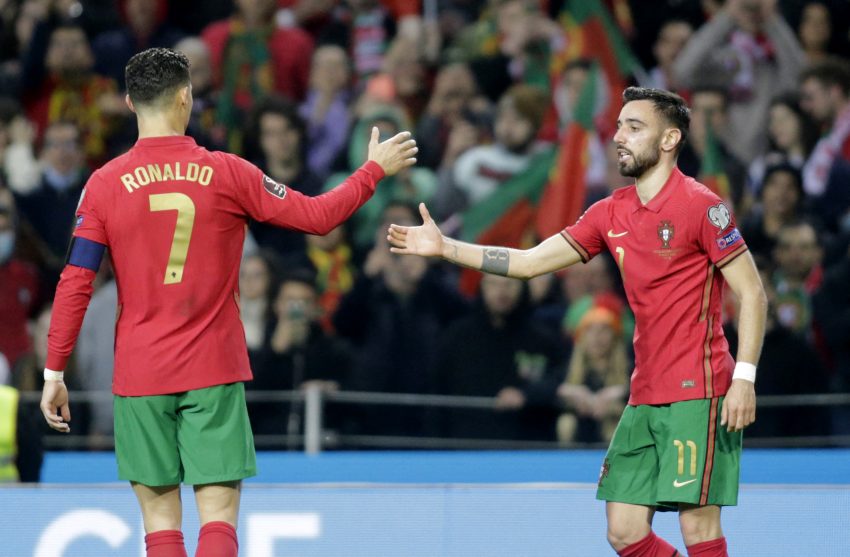 Bruno Fernandes was at his goal scoring best in Portugal’s 2-0 win over North Macedonia.

Portugal’s place in the 2022 World Cup is confirmed thanks to Fernandes, who got himself a brace in the Path C play-off final on Tuesday.

For the opening goal, he calmly placed Cristiano Ronaldo’s nutmeg pass beyond the reach of the visitor’s goalkeeper. Fernandes’ finishing for the second goal was even better, as he blasted the ball into the net with a first-time finish at speed.

Portugal manager Fernando Santos started Fernandes on the right side of a midfield three, but utilised the attacking midfielder’s eye for goal emphatically by allowing him to make runs into the penalty area on a consistent basis.

He effectively played as a second striker, and took advantage of Ronaldo and Jota’s movements to exploit space left by North Macedonia’s backline.

Bruno showing – as he so often does – that he's at his best when he's making runs into the box. He's much more of a second striker than midfielder. Always flourishes when he's allowed to play that role for United – sort out the midfield so he can stop dropping deep#MUFC

Bruno Fernandes could genuinely play in a two-striker system like a 4-4-2, his movement is really impressive & he has the tenacity to press from the front line. Has a lot of good ‘defensive/gritty’ whilst also being able to play the final pass of a sequence on the last line.

Ole Gunnar Solskjaer gave him a similar role in Manchester United’s Premier League opener against Leeds United. Mason Greenwood’s tendency to drop deep worked in the Portuguese’s favour, as he bagged a hat-trick at Old Trafford.

Fernandes hasn’t been at this best under Ralf Rangnick, but United’s next manager, whoever it may be, needs to take a note from Santos’ approach to make the most out of his finishing and movement.

The 27-year-old is in the club’s long-term plans and has been offered a new five-year contract.