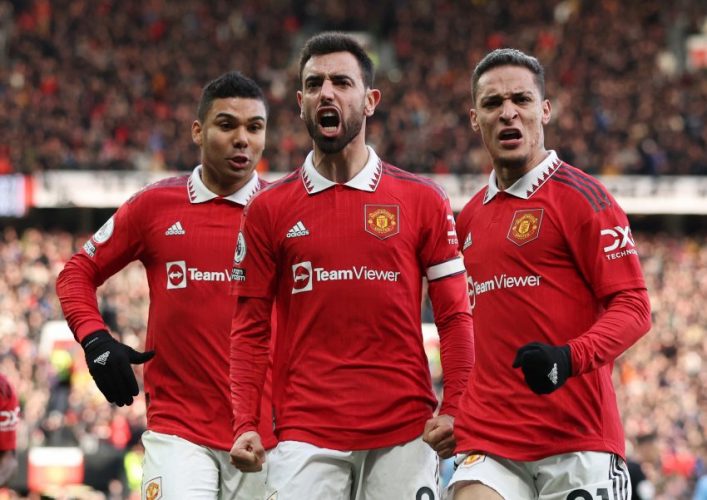 Only the sun shone brighter than Manchester United as the Red Devils stamped rejuvenated authority over their neighbours in a thumping display of excellence. Erik ten Hag’s side secured a 2-1 victory with Jack Grealish’s silencing opener deafened by Bruno Fernandes and Marcus Rashford with their well-crafted team goals.

Here’s how the home side fared during the most exciting derby in recent memory.

The Spaniard could have been positioned better for Grealish’s attempt but actually had his work cut out for him by a backline which permitted City only one shot on target.

The Spider was back to his old form and made decisive runs and tackles to ensure that City’s flanks were choked well, preventing breakthrough attacks and forcing the away team to play inside.

The Frenchman did make a few errors in his clearances but was a solid and reliable presence at the backline.

Ten Hag’s experiment sees fruit yet again with the Englishman at centre-back providing apt fluidity to the side as a unit.

Did little wrong with this start and was instrumental in making decisive tackles which cut access to the City trident.

Another salivating response from the Brazilian who was at his creative best for much of the game.

While critics will point out that when Fred most needed to cover De Bruyne he failed to stop the assist, the Brazilian frustrated the Belgian for much of the game, nipping several attacks in the bud.

Appeared more like the Bruno of the Solskjaer era with his infectious passion and clever guidance as captain. If not for his call to Marcus Rashford, the equalizer could have well been offside.

Save for an early bit of creative input, the attacking midfielder appeared to be overlapping in his role with Fernandes. Something for Ten Hag to optimize in future games.

The clear man of the match and had yet another goal to add to his incredible run. Was calm and cool in his attack and was instrumental in both goals.

The Frenchman was underwhelming up-front and will now have to worry about his spot given the loan acquisition of Wout Weghorst.

Super sub in many ways. He changed the attacking intent of the game, and his persistent run created the winner.

Will have to work hard to retain his starting spot but was passionate during his time on the pitch.