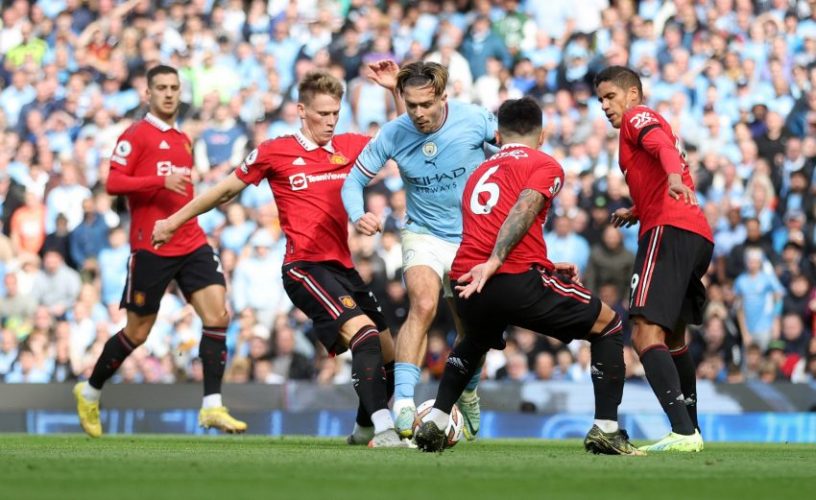 Erik ten Hag’s Luke Shaw experiment is arguably one of the best recent gambits in football. The Englishman has partnered Raphael Varane in the defence as a centre-back, effectively keeping World Cup winner Lisandro Martinez at bay.

In doing so, a World Cup-winning centre-back pair is denied to the Old Trafford faithful.

Regardless, the unlikely pairing paid dividends against Manchester City recently. United won 2-1 in a convincing display. Martinez’s late return from Argentina after extended celebrations could be a reason behind his absence from the starting XI. Regardless, when the 25-year-old was given the chance to put in a cameo appearance, he sure did not disappoint.

Fans were happy to see the centre-back introduced into the starting lineup by ten Hag in the final minutes of the game. Brought on alongside Harry Maguire, the intent was defensive assurance. However, Martinez did not waste time in making his presence felt, and did so in an amusing fashion.

Seconds after coming on, the Argentine picked up a scuffle with Jack Grealish and the confidence with which he went into the confrontation was not that one of a fresh substitute.

Fans were certainly entertained by the sight as Martinez stayed true to his nickname of “The Butcher”. Moreover, such a sight could also be an indicator of how keen the defender is to get back into the starting lineup.

Incidentally, Grealish was the sole scorer for City during the derby. The contentious nature of United’s equalizer and quick winner afterwards would not have left the English forward in the best of moods.

Having said that, supporters will now be wondering what ten Hag’s next step will be with regard to Shaw’s position, especially given Martinez’s keenness to perform.